There is a glaring disconnect today between the economy and the recently resurgent stock market. The market acts as if announcements of the latest potential virus vaccine or 2.5 million people returning to work in May (despite close to 20 million still unemployed) are signals to push it even higher. As I write this, the Dow just dropped over 1,800 points, rallied, and is racing back to 26,000. It seems that in a matter of no time everything will be corrected and all will be good again. The retail stores will open, restaurants will be full, airlines will return to profitability while adding more flights (don’t tell Warren Buffett), hotels will charge their usual high-season rates and cruise ships will be anchoring at exotic ports around the world. Better yet, American manufacturing plants will be turning out product, automobiles will be built, consumer products will be flying off the shelves and 20 million people will return to work.

As someone who has experienced several downturns in the market over the past 30 years, I can’t help but feel this one is different, and not in a positive way. There are a few things gnawing at me that make me feel the worst is yet to come. When it does, companies need to have the right executive team in place and, in many cases, they are not the people in those roles today. In this recession companies are going to need to fight harder to keep their market share, let alone expand it. The government-mandated economic shutdown favored companies in a strong financial position that were capable of weathering the storm and those in niche spaces that could still prosper. Nevertheless, many companies are going to have to claw their way back to their previous levels and others just won’t make it.

While I hope I am wrong, there are too many unanswered questions and variables that have real impact on the direction of the economy, businesses in general and, eventually, the stock market. Here is what I see and why we shouldn’t ignore it:

Individually any of these points can be argued and possibly managed. Together, they should raise a significant alarm to corporate and business leaders across all industries. That’s why it’s imperative to have the best executive team in place now in order to survive and win in our current recession.

So, what does this have to do with recruiting? A great deal if you need to manage through a tough and uncertain economy, which all businesses are doing today.

From my many conversations over the past few weeks it is apparent that most companies have instituted a hiring freeze. Many are uncertain as to how quickly they can ramp up their respective businesses. Most seem confident or at least project confidence. Nevertheless, starting up again will be different this time. I understand that some companies just don’t have the capital to do anything even if they wanted to make changes. However, for those that do have the resources or those that must change leadership, now is the time to do it. 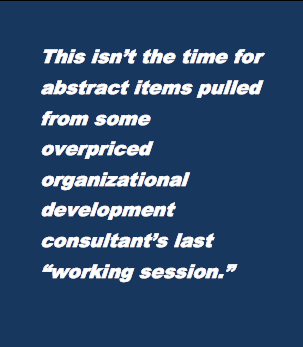 Uncertain times heighten the importance of building a performance-based executive team. Simply, this is a team where each participant is tasked to outperform the norm within their respective industry. We all know that only by exceeding industry growth can we gain market share. This holds true for all metrics across the company. Costs must be less than industry average; revenue per employee must be higher, and margins thicker. A performance-based management team is just that, a team that is driven to outperform its competition in every category. Metrics will drive your evaluation of your executive team as well as its individual contributors; not intangibles such as personality. While getting along well with team members is imperative, the metrics needed to be an effective member of a successful performance-based management team are more important; especially in a down economy.

With that in mind, assess, retain and recruit should be at the forefront of your company’s strategy. It doesn’t need to be complicated. In fact, keep it simple.

Now is a great time to evaluate your team and your company, plan your changes, and then execute on your talent strategy. If you need to augment or build a performance-based team, here are some straightforward assessment guidelines to make it happen:

Roll up your sleeves and dig into the data. What does it tell you? Once you have assessed your management team you should have a keen understanding of its strengths and weaknesses as well as a clear strategy on how to configure/reconfigure your team. A simple weighted retain or recruit model will guide your approach as you move forward. Then execute your talent strategy. 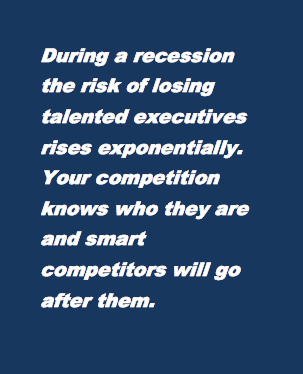 During a recession the risk of losing talented executives rises exponentially. Your competition knows who they are and smart competitors will go after them. If there are problems within your company let your best executives know they are a critical part of the solution and then lock them in by tying them to financial incentives such as additional bonus money and equity. While it is counterintuitive during a recession to add more compensation, it’s the right thing to do for building a strong performance-based team.

Don’t take it for granted that your best executives will stay. Your best performers know their worth. You know who they are. They are the ones who are fearless and are not afraid to take chances to help their employer win in the marketplace. Nevertheless, to keep top talent, your company has to be a winner or be perceived as on the verge of becoming one. Anything short of that is unacceptable and they will look elsewhere, especially if they feel the CEO and/or Board aren’t doing enough to fix the issues at hand. And those issues include retaining as well as hiring performance-based executives; the kind of talent that moves the ball downfield.

With that in mind, here are my recommendations to retain performance-based executives:

With your key executives secured and performance metrics in hand, it’s time to fill out the team.

Once you have decided you need to recruit from outside your organization, either through your internal executive recruiting team or from an outside retained firm, let’s address two important points on recruiting a performance-based management team during a recession. The idea that there will be an abundance of top-tier candidates available “if we just wait a few months” is FALSE! The misconception that top talent (90th percentile) will be cheaper to acquire in a recession is FALSE! 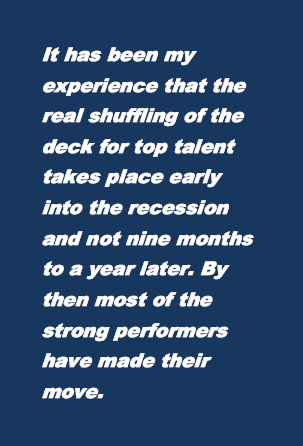 If you need/want to upgrade your team, do it earlier rather than later. It has been my experience that the real shuffling of the deck for top talent takes place early into the recession and not nine months to a year later. By then most of the strong performers have made their move. There may be an abundance of executives unemployed or looking for something new, but the strong performers will have their pick of opportunities. It is not, despite what many think, a buyer’s market, at least not for those in the 90th percentile. They know their accomplishments, the value they brought to their employers and the impact their expertise had on the top and/or bottom lines. They are hunters looking for the next best opportunity. They know when the right thing comes along and they won’t hesitate to move on it when it does.

As a leader you must be prepared to pay what the market demands. The problem most CEOs and Boards make is the expectation that they can hire a 90th or 95th percentile candidate at 60th to 75th percentile compensation packages. Why? Because they believe that a recession will attract someone in the 90th or 95th percentile to come on board simply because there are millions of people out of work. Unfortunately for those CEOs and Boards these are high-caliber proven executives that have the means to be selective. Part of that selectivity is getting paid for their worth.

With the above in mind:

It is during difficult times that CEOs and Boards must take a closer look at their talent. During the assessment phase, deficiencies within the team can be glaring. You may know you need to make changes, but don’t fall into the trap that many companies do in the retention and recruitment phases. They fear the short-term costs associated with these steps and fail to execute on them. The failure to act can cripple their chances to thrive during uncertainty.

The alternative of losing great executives and hiring mediocre ones is likely to be far more costly in both the short and long runs to your business. It is in times like these that CEOs and Boards need to be courageous and execute the course many others are too timid to take. The hard path taken often makes the difference between winners and losers in the world of business. Ask yourself, which are you?